These beautiful silver sculptures were made by the well known silver smithy Georg Jensen in the late seventies and were part of the smithies 75 year anniversary exhibition, which travelled around the world in 1979.  Unfortunately they never became a commercial success, and now, after the company has become part of the larger Royal Scandinavia, they are, apparently, no longer available. 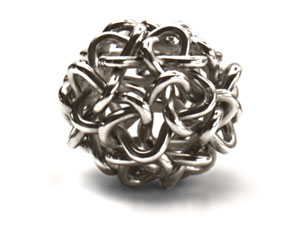 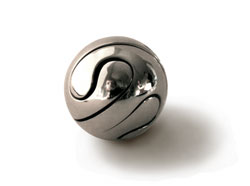 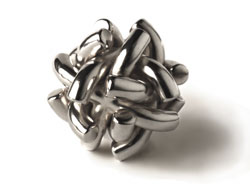 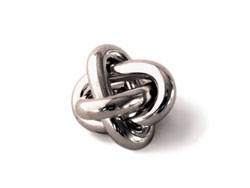 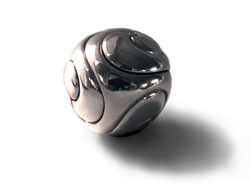 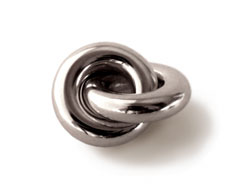 Lately, I have become interested in making large sculptures. The two mock-ups and the computer model on this page are my first attempts in this direction. 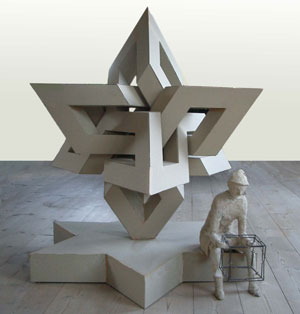 This sculpture is an homage to M. C. Escher and the inspiration he has been to me and many others.  The title refer to a letter I once wrote to him about my Dual Planetoid but, alas, never sent.

The medieval man sitting on the base is modelled after Escher’s print Belvedere.  His function here is the same: explaining the structure behind him. 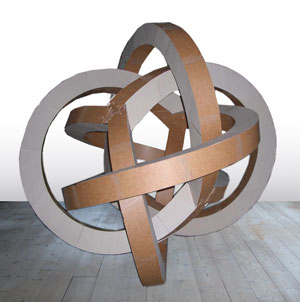 This structure can be constructed from the edges of a tetrahedron by stretching each edge and taking it on a detour around the back.

Performing this operation on all edges results in knotting the edges bordering each face into a trefoil. Mathematicians will know that the faces, if they were included , would therefore be Möbius strips. I can’t imagine what that would look like. Can you?

Six twisted chain links in a regular constellation (hexa link constellation). The image is computer generated but proves, I think, that the sculpture would be suitable for a modern metropolis like Hong Kong.